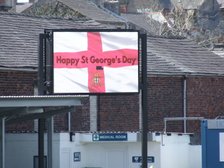 Clitheroe finally made home advantage tell in the final minute of injury time but they were pushed all the way by local rivals Ramsbottom.

The home side made a bright start and Sefton Gonzales fashioned the first chance after 8 minutes, hitting the ball straight at the keeper. One minute later, he was all primed to pull the trigger only to be ruled narrowly offside. However, the crowd did not have long to wait for the first goal, with a teasing free kick from Joel Byrom causing a flurry of activity in the opposition box, before Ross Dent stabbed the ball home.

Max Cane, who was a thorn in Ramsbottom’s side all game, had the first of his telling runs shortly afterwards, but his superb cross eluded the home side. Then from nowhere, on 18 minutes a superb lofted pass over the Clitheroe back line saw Donaldson burst free and he unleashed an unstoppable shot on the run to level scores against the run of play. For much of the rest of the half, it was the visitors who were probing for more goals, including ballooning a sitter over the bar after 31 minutes. As the game entered injury time, a high bouncing ball was caught by the strong wind and the back pedalling Cameron Lancaster and advancing Chris Thompson came together, with the suggestion of a Ramsbottom nudge, without touching the ball, and the visiting striker had the goal at his mercy to give the lead to Ramsbottom.

In the second half with the wind at their backs, Clitheroe initially laboured to carve out clear chances, and it was not until the 74th minute when Billy Priestley scored with a bullet header from a Danny Wilkins corner that some fluency was injected into the play. Gabriel Humphries came on as substitute and brought extra pace and invention to the game and chances came.

Cane had another run and cross which caused panic in the visiting ranks and as the clock ticked down Humphries hit the bar after a great series of passes fed the ball across from the right. And yet, the season was destined to end on a high and it was no surprise when Max Cane bulged the net with seconds to spare, to seal an astonishing run of 16 goals in 17 games.

Shawbridge let out a collective sigh of jubilation and relief, and saluted the team at the end of the game, knowing that expectations have been raised for a realistic crack at the title and play offs next season.